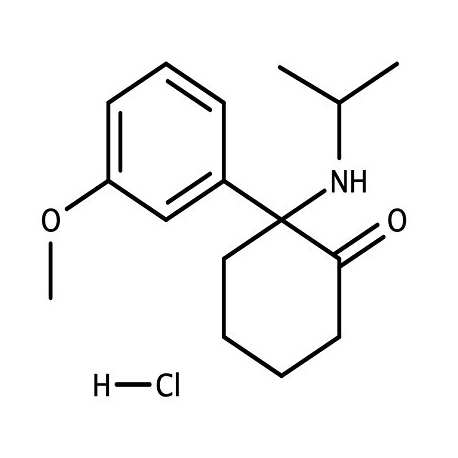 We are pleased to announce the release of a new compound; MXiPr HCL hydrochloride (3-MeO-2'-oxo-PCiPr). This product adds to our rapidly expanding portfolio of arylcyclohexylamine molecules with dissociative properties. MXiPr HCL is a very close analogue of MXE and MXiPr HCL , and therefore shares similar properties. Our initial experiments and primary feedback have been promising, with many researchers commenting on the compounds similarity to MXE!

Although little research has been conducted on the substance, it has been reported to produce ketamine like dissociative effects when ingested. It is also structurally similar to phencyclidine (PCP), a substance that gained notoriety in the 90s and 2000s as an illicit recreational drug.

As mentioned above, MXiPr shares many of the same chemical properties as other substances of the arylcyclohexylamine class of compounds. Its psychoactive effects are believed to be due to the way it acts as a non-competitive NMDA receptor antagonist. For normal brain function, electrical signals must be able to pass between the spinal cord and neurons in the brain through NMDA receptors. When an antagonist chemical is bound to these receptors, these electrical impulses cannot pass, resulting in loss of communication between the higher-level parts of the brain and the spinal cord. This breaking off of communication is what produces the dissociative state that compounds such as ketamine and PCP induce when ingested.

Note: MXiPr has not been approved for human consumption and is for research purposes only.

Although no formal research has been conducted on MXiPr, due to its arylcyclohexylamine chemical structure it can be assumed that it produces similar effects to other, more well studied, compounds of the same class.

Hallucinations: arylcyclohexylamines are known to cause hallucinations ranging from mild to extreme when administered.

Sedation: One of the most common effects of dissociatives is heavy sedation. In fact, Ketamine, a substance closely related to MXiPr, was at one point used as an equine tranquilizer.

Confusion: Because of the way MXiPr binds with and closes NMDA receptors, it can be assumed to cause confusion when administered.

Loss Of Motor Control: All dissociatives produce some level of motor control loss due to the way communication between the spinal cord and brain is interrupted. At high doses, arylcyclohexylamines may leave a person completely incapacitated.

Pain Relief: Several chemicals of the arylcyclohexylamine class have been used, at one time or another, as a pain management drug. Although no studies have been done on MXiPr, it can be assumed to do the same given its chemical structure.

Visual Disconnection: Seemingly unique to arylcyclohexylamines, chemicals of this class have the potential to make individuals feel as if they are detached and distant from their own field of vision. At high doses, many people have reported losing contact with their sight entirely, not being sure if their eyes are opened or closed. This phenomenon is colloquially referred to as ‘hole-ing’ and has been described as both pleasant and terrifying.

Loss Of Spatial Disorientation: Spatial orientation is roughly defined as one’s ability to perceive their location and position relative to their surroundings.